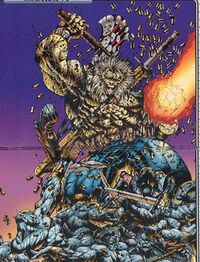 Combat is a man of few words. He hates Earth and love killing as many of us as legally possible.

Kh'ambt was an accomplished soldier for the Katellan forces. He had been trained under the renowned Admiral Kh'rk. However, despite a promising career, he got accused of orchestrating a plot to overthrow the Katellan Emperor. Kh'ambt escaped with the Acuran Photon. He sought political asylum in exchange for knowledge of Katellan technology. He joined the government operated Youngblood program until its original demise. He then returned to space and the Katellan people.

Retrieved from "https://imagecomics.fandom.com/wiki/Kh%27ambt?oldid=66881"
Community content is available under CC-BY-SA unless otherwise noted.