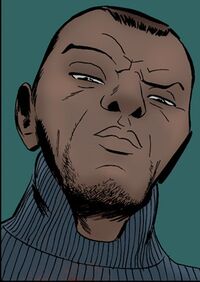 Khalid DeGuerre is the ruthless CEO of the TeeVee corporation.

Khalid led secret meetings in the slums portion of town referred to as The Tubes with plans to relaunch the internet. Taj McGill and Nebular were regulars in the meetings. One day, Taj announced she was leaving the group. Khalid waited for Taj McGill to return home and murdered her to keep her from spilling their secrets. He found the name Patrick Immelmann written in pen on her hand.[1]

Later, DeGuerre dressed in Taj's Nym, called Nebular to The Tubes pretending to be her. Nebular arrived and lauded Taj for calling him. He said he wasn't sure he'd hear from her after they left The Group. DeGuerre revealed his identity from the Nym and pulled out a knife on Nebular.[2] DeGuerre had Nebular drive him to his secret base. He received a call from his Frenchmen henchmen who had examined PI's finger. They found no prints as he had burned them off with acid. He ordered them to find where PI lived. DeGuerre brought Nebular into his work and showed him he had built a gigantic missile, "in order to change a few minds."[3]

DeGuerre had Nebular fix his missile. Nebular told him he could get it to fly but the technology was very dated.[4]

DeGuerre sat in his office when his secretary ushered in Mr. Bryant from engineering. He told him he believed someone might be shooting private customer information in from their TeeVees. The man thought a rogue engineer might be looking into people's lives with TeeVee technology. DeGuerre asked if he'd told anyone else and he responded that he hadn't. DeGuerre smashed his face into the desk and finished him off with a desk lamp. He called Johann in to dispose of the body.[5]

DeGuerre told the Frenchmen to investigate hospitals to see if the news story featuring PI panned out. They wanted to discover how much PI knew about their plans to relaunch the internet.[6]

Eventually PI raided the base and tricked DeGuerre into believing he was Nebular, who he had already attacked. He then killed DeGuerre and stopped the missile from relaunching the internet.[7]

Retrieved from "https://imagecomics.fandom.com/wiki/Khalid_DeGuerre_(The_Private_Eye)?oldid=50613"
Community content is available under CC-BY-SA unless otherwise noted.