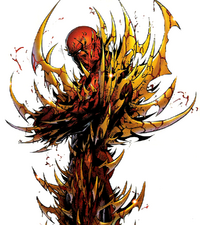 Killrazor was once a member of an assassin guild, Keya' Su' Matra. This indicates that he is one of the triplets, what happened to his brothers is unknown, but it's most likely that they died.

Killrazor was rescued by Morgan Stryker and his first team on his first mission. He later was recruited to Stryke Force by Black Anvil under order by Stryker.

Retrieved from "https://imagecomics.fandom.com/wiki/Killrazor_(Top_Cow)?oldid=56604"
Community content is available under CC-BY-SA unless otherwise noted.