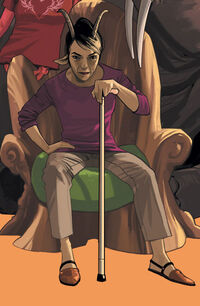 Klara was born on Wreath, which has been at war with Landfall for decades.

Klara raised Marko, her son, in a time when the great war had been outsourced to other planets. They took him to the war-torn and blood-stained soils where the last great Wreath battle took place. From that day forward, Marko learned to hate the people of Landfall.[1]

Later, Klara and her husband, Barr, believe Marko to be in trouble when they sensed the family heirloom sword had been broken. They teleported aboard his rocketship and believed he was being attacked by Izabel and Alana. Klara used a Banishment spell on Izabel forcing her to a nearby planet. Marko quickly showed them his child and informed them it was his wife and kid.[2]

Marko grabbed a Crash Helm to teleport to the nearby planet to save Izabel. Klara went with him. They soon found themselves in a fight with Fard who informed them Izabel would soon be eaten by the planet, which was actually an egg that was about to hatch.[3]

When Marko and Klara returned to the ship with Izabel, they attempt to take off but are pulled back towards the Timesuck. Marko throws the Crash Helms into the furnace to force the ship to fly faster. However, it is being pushed faster than it was designed to go and begins to break apart. Barr began to hold the ship together with a binding magic spell. However, it pushes his luck too far and he soon dies of heart failure. Klara and Marko grieved for weeks at his loss on the rest of their journey to Quietus.[4]

Upon arriving in Quietus, hey find D. Oswald Heist drinking his days away and Klara finds him disgusting for being anti-war.[5] Overtime, the two bond and share a special connection even though she had recently lost her husband. They soon were forced to hide in the attic due to Prince Robot IV arriving.[6]

When the Prince shot Heist in the knee, Klara couldn't take it anymore and rushed downstairs to help him. However, the Prince used his arm cannon to fire at Klara knocking her back. Heist pulled out a gun and shot the Prince in the back in retaliation breaking his oath of peace. When Heist checked on her, he found Klara was okay as most of the impact was absorbed by her ax. Suddenly, Gwendolyn broke in to demand the secret to healing her new love. When Heist pulled a gun on her, Gwen stabbed Heist through the eye killing him enraging Klara.[7] After a brief scuffle with Lying Cat, the group was able to escape the lighthouse and head to Gardenia to try and live a new war-free life.[8]

On Gardenia, Klara continue to take care of the ship and watch over Hazel as she quickly grew.[9] Klara spent most or her days reading Heist novels to commiserate his loss. When they were suddenly attacked by Dengo, an insane poor Robot Kingdom member, she retaliated but ended up being held hostage.[10]

While she was being transported by the Last Revolution, Hazel and Klara were taken by the Royal Guard and were sold off to a detention center run by the Landfall Coalition. When Klara and Hazel arrived for a cleansing and debrief before being introduced into general population, a doctor stuck up for them, which was strange for a landfall troop to stick up for a 'wing'. However, once they were alone, the doctor transformed to reveal it was Izabel and she was going to attempt to help them. However, years went by and on Hazel's fourth birthday she was still on the planet still hiding her identity from everyone. Klara was very adamant about making sure she kept her secret from everyone and would scold the girl whenever she talked to strangers.[11]

Eventually, Hazel had enough and revealed her wings to her school teacher, Noreen. Noreen passed out from the surprising news and bashed her head on a table.[11]

Retrieved from "https://imagecomics.fandom.com/wiki/Klara_(Saga)?oldid=49229"
Community content is available under CC-BY-SA unless otherwise noted.