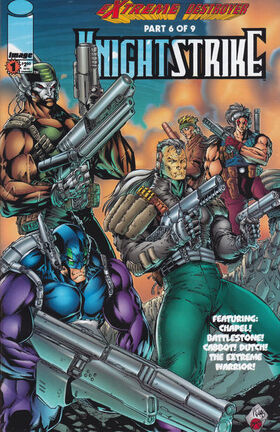 Appearing in "Extreme Destroyer part 6: Out of the Fire and Into the Blue!"

Plot Synopsis for "Extreme Destroyer part 6: Out of the Fire and Into the Blue!"

Dutch and Marla Thomas arrive at the crashed Keep ship in Peru.  When Colonel Bravo and Link materialize in a burst of energy, Marla shoots at them.  Link destroys her gun, and Dutch talks with Bravo.  Then, Battlestone arrives with Bloodstrike, Chapel, and Extreme Warrior.  Elsewhere, Maximage lets the Ancient and New Man know that Dutch has made contact as intended.  At the Pentagon, Alan Keever and Sentinel chastise Supreme for not going with Youngblood to fight the Keep.  An explosion rocks the building as hundreds of Keep soldiers mass outside. Supreme and Vanguard fly off to face them.  Back in Peru, Battlestone explains the crashed ship is a Keep slave craft used in “the Harvest.”  He and Dutch snipe at each other until they come to blows, but the others stop their fight. Suddenly, the ship’s systems come back online, and it takes off to rendezvous with the Keep mother ship.  Back on Earth, Dusk and Narcisse see Supreme battling the Keep ships overhead.  They hear someone groan behind them and are surprised when they see who it is.  Aboard a Keep slave ship, Dash shocks her fellow New Men by saying they should go along with the Keep.  Then, Black Jack appears and teleports her away.  Upon docking with the main Keep ship, the informally re-formed Knightstrike and their allies begin slaughtering Keep troops.  Maximage telepathically tells them to find and free a special prisoner. Battlestone orders them to split up and free every prisoner aboard.  Marla goes with him intent on killing him in revenge for husband’s death.  Supreme bursts in, causing a hull breach, and Stone saves Marla from being sucked out into space.  Someone abruptly seals the breach, and when Stone asks who, his father Quantum announces himself.