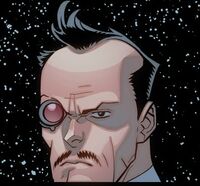 Kregg was born on Viltrum and is thousands of years old.[1] He would fall victim to The Scourge Virus and lose his eye.[2]

Sometime during his life, He would assume a high rank position in the Viltrum Empire. He would task Mark with preparing Earth for Viltrumite takeover or he will be killed if he doesn't comply.[3] To check on his status, he would send Anissa to do.[4] After she failed to convince him, he called it a shame as they could have used him.[5] He would also see Nolan Grayson destroy much of the Viltrumite Prison. He would see that Nolan is in full condition and that he will be put to death.[6] After roughening him up, he leaves him to two other Viltrumites.[7]

After Conquest failed to kill Mark, Conquest returns to the Viltrumite Warship. He angerily tells Conquest to bow to Thragg as none may address him unless bowing.[8]

Kregg would be seen helping Anissa lay waste to Talescria. He would briefly battle Thaedus until Allen the Alien and Tech Jacket (Zack Thompson) come to his aid. Kregg would briefly battle Allen until Nolan, Mark, and Oliver to assist. He would use the chance to punch Allen and escape with Thragg.[9] The group would retreat to their home planet, Viltrum. After Thula launches the suprise attack on the Coalition of Planets, Kregg charges with Thragg. Space Racer would arrive with the Ragnar and release it upon them. Thaedus would briefly battle Kregg until Mark reveals to Thragg that he killed Conquest, much to his shock. After Nolan, Mark, and Thaedus destroy Viltrum, Allen would turn his attention to Kregg and they would battle until Viltrum's explosion stops. KRegg would recover quickly, unaffected by the planet's explosion. He would witness Thaedus's death by Thragg.[10] Kregg, Anissa, and other Viltrumites would overwhelm Allen, managing to break his arm. Space Racer fires his gun and saves Allen. After Thragg would nearly kill Nolan and leave Mark injured, Thragg asks that they be spared. Kregg disagrees and attempts to kill the duo, stating that they are not loyal to the cause. Thragg stops him and says that they need the duo above all other. They get aboard the Viltrumite Warship and leave.[11] The Viltrumites would head to Earth and spend months there. Kregg would hide his cybernetic eye with an eyepatch and possess the apparael of a biker.[12] He would interfere with the Flaxan invasion of London by saving a few people from falling debris.[13] Thragg would reprimand him for doing so and he apologizes as he says a woman carries his child in London. Thragg argues that he has more than a dozen women pregnant with his children. Kregg says that he knows and that he loves them all, showcasing that his time on Earth has changed him like Nolan.

The Death of Everyone

Kregg would make an appearance with the other Viltrumites and would go depressed at the fact that Thragg threatened to kill anyone who interferes with the events.[14] He would also be one of the many people to see Mark's "death." [15]

Kregg would meet with Thragg on the Viltrumite Warship and be reprimanded for he risks exposing Viltrumite presence on Earth. Kregg argues that the goal was to produce offspring and that he cares about his mates, stating that he couldn't sacrifice them. An angry Thragg tells them to leave and says that he will deal with them later.[16]

He would catch Thragg attempted to kill Nolan and stop him. Upon hearing that Nolan is the son of Argall, he along with Anissa, Lucan, and Thula would pummel Thragg and attempt to kill him. Nolan commanded that they spare him and they obey. He would later attend Nolan's inauguration [17]

Retrieved from "https://imagecomics.fandom.com/wiki/Kregg?oldid=66787"
Community content is available under CC-BY-SA unless otherwise noted.