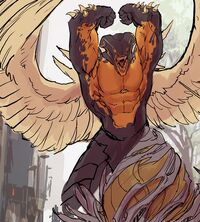 Krono is a powerful warrior who fights for the High Caste. He was ordered to steal the Witchblade by General Celestine when Kenneth Irons sent it to Sonatine by armored car. However, in his rage to open the armored vehicle, he inadvertently threw it at Mary. When the smashed truck pinned Mary against the wall and the Witchblade fell into her hands, she became the newest Witchblade bearer and battled Krono.[1]

Retrieved from "https://imagecomics.fandom.com/wiki/Krono_(Switch)?oldid=55574"
Community content is available under CC-BY-SA unless otherwise noted.