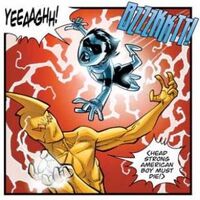 Kursk was the arch-nemesis of the late Red Rush. Later, he became one of Machine Head's bodyguard along with Battle Beast, Magnattack, Furnace, Magmaniac, and Tether Tyrant. The six of them took on Invincible and Titan. Kursk got the high ground and then shocked Titan. Titan knocked Kursk into Battle Beast into Magnattack, who flew the three off of him. When Titan and Invincible were defeated, Kursk took the glory with Magnattack rather than Battle Beast. Then, the Guardians of the Globe showed up and Kursk became nervous. Rex Splode threw an explosive golf ball at Krusk's head while Dupli-Kate duplicated and jump-kicked Kursk in the face. Kursk electrocuted one of Dupli-Kate's duplicates while Rex Splode threw multiple explosives at his face. Kursk was defeated by the duo.

Kursk was later hired by Mister Liu to break Multi-Paul out of Stronghold Penitentiary with Furnace. They took out some guards although Kursk spoke in Russian so Furnace did not understand him. They were attacked by Invincible in his new costume for the first time, and Kid Omni-Man in his costume for the first time. Kursk spotted Kid Omni-Man and shouted "Is Raining Boy!" which prompted Furnace to completely ignore him. Kursk electroucted Oliver and sent him crashing to the ground before Oliver could land a punch. An angry Invincible throws Furnace at Kursk, breaking Furnace's costume and burning Kursk. Kursk is then imprisoned at Stronghold Penitentiary, and is unable to participate in future missions involving Mister Liu or Titan.

In prison after the Invincible War, Kursk witnesses the Astounding Wolf-Man be defeated by his daughter which unintentionally frees Kursk. Kursk and a fellow prisoner, Thrill Kill, attack Wolf-Man's daughter. She dodges a bolt from Kursk with ease, but a second one shocks both her and Thrill Kill. Wolf-Man revives and helps his daughter take the pair out.

Kursk later attempts a breakout after the Viltrumite War, but is stopped by Invincible, who reflects the electric shocks and defeats Kursk with ease. Kursk is imprisoned once more. When Invincible is supposedly killed during the Death of Everyone, Kursk in Stronghold Penitentiary is watching on TV shocked. (That's an electric pun, get it? No? *sigh)

Afterwards, when Mister Liu is transported to Stronghold and releases his dragon, Killcannon convinces Kursk to escape with him, followed by Doc Seismic. Kursk is confused and asks if the dragon belongs to Mister Liu, but the trio are attacked by El Chupacabra and Code Blue, the latter of whom cannot be recognized by Kursk. El Chupacabra jumps on Killcannon, knocking him down. Kursk shoots a blast at the heroes, who dodge. Code Blue is annoyed that Kursk forgot who he was, and knocks Kursk out with a baton. El Chupacabra takes out Doc Seismic, and the trio are imprisoned in Stronghold Penitentiary once more. It is unknown if Kursk and Killcannon escaped when Doc Seismic did later.

Retrieved from "https://imagecomics.fandom.com/wiki/Kursk?oldid=48014"
Community content is available under CC-BY-SA unless otherwise noted.