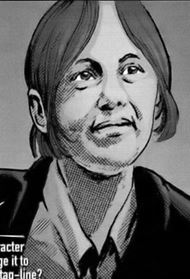 Lacey Lyons is a nine year-old actress in New York City. She became the idol of many small girls across the world, particularly to Lily Williams, Twitch Williams' daughter.[1]

One day, the New York City Police Department was assigned to perform extra guard duty for one of her sets. Twitch and Sam Burke performed guard duty and Twitch wanted more than anything to get her signature to impress his daughter. When they heard a disturbance in her trailer, they broke in and found a man named Sylvester was bothering her. Hanson Lyons jumped in and told them it was Sylvester and he was supposed to stay away from Lacey. He told the police to let him go without charged, but to keep him away. Later that night, Lacey was found dead in her home.[1]

Sam and Twitch investigated her case and discovered she was sexually abused and murdered by her controlling father, Hanson.[2]

Retrieved from "https://imagecomics.fandom.com/wiki/Lacey_Lyons?oldid=49116"
Community content is available under CC-BY-SA unless otherwise noted.