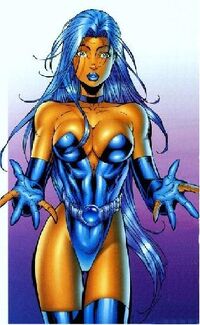 Riptide got her powers during an undersea accident that would have killed her if not for the mysterious Sea Witch. The story of her getting powers was a story, which had been carefully written by her father Storybook Smith many years earlier. Her father left before she was born, but she must have grown up with the story of her famous father and his book, which had been stolen.

When Leanna got her powers, she joined Youngblood. Originally she did it to make some quick money, but soon became an integral part of the team.

When Riptide agreed to pose nude in Pussicat Magazine, she was apparently fired from Youngblood, but after Crypt had destroyed part of Youngblood and Battlestone became leader, she was asked to join again.

During a Youngblood barbecue at the Langston household, Riptide found her fathers missing book on Langston's shelves and took it. When Langston realized who had taken the book, he went to Riptide's room, while she was out walking, to take it back. Unfortunately Leanna came back early and surprised him. In the following fight, Langston killed her in cold blood, and tried to frame Knightsabre for the murder. Langston's plans were revealed by Toby King, who found the book, and Langston was put in the Hell of Mirrors in Supreme's Citadel.