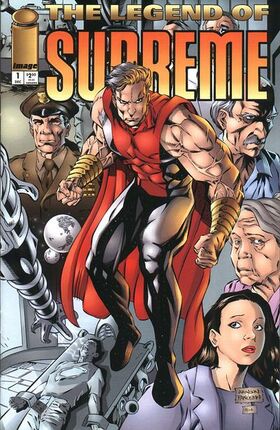 Dissatisfied with her interview of Supreme, reporter Maxine Winslow decides to investigate his background further.  In Connecticut, Supreme has just destroyed the headquarters of a genetics company and killed all its employees but one man.  He orders the man to spread his demand that humanity abandon all genetic research immediately.  Maxine sees the man interviewed on TV and notifies her editor of her investigation. She starts by interviewing Supreme’s handler during World War II.  He tells her how Supreme enjoyed the war and deliberately prolonged it.  He then directs her to a woman named Sophie Miles.  Aware of Maxine’s activities, Supreme deliberates what to do and begins quoting the Bible.  In St. Louis in 1937, Ethan Crane entered a bar and a shot a man for having sex with Sophie, then a 15-year-old.  Once Crane left the bar, the police shot him.  Now an old woman, Sophie explains to Maxine that Crane survived and was sentenced to life in prison.  The government released him in exchange for his participation in the experiment that later transformed him into Supreme.  He and Sophie became lovers, and he still visits her.  In Massachusetts, leaders of the Covenant of the Sword decide to covertly expedite Maxine’s investigation because Supreme’s crusade against genetics threatens their operations.  In Las Vegas, influential power brokers debate how to fight Supreme.  In 1939, Crane underwent Dr. Horatio Wells’ experiment in a lab beneath Washington, D.C.  Wells’ last surviving lab assistant reveals to Maxine that Crane was the seventh test subject to die.