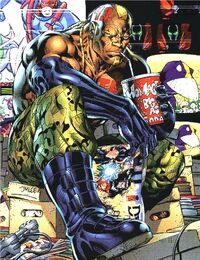 Leon grew up with his mother in West Memphis, Arkansas. The identity and fate of his father is so far unknown. Leon went to Howard University in Washington, D.C., but quickly found himself in finacinal trouble. Due to his low grades during the first semester, he wasn't awarded a scholarship trustee, despite his good grades the second term and a position on the football team. He was visited by a government agent who told him that they were aware of his difficulties and that he had been selected for a special program. Believing he had no choice, Leon accepted and became a part of Project: Genesis, a special program of International Operations. Leon like all subjects, had been tested positive for the gen-factor substance that could give regular humans superhuman powers. The subjects were fed a special activator drug during the program. Leon's first signs of Gen-activation were a discoloration in his hair, which went from black to yellow. At first he hid his hair and considered shaving it all off, but then he decided to just accept it. He also started to have nightmares and high fever. In the infirmary he was cryogenically frozen.

Interference from John Lynch and Project Genesis subjects Gen¹³ meant the end of the program and Ivana Baiul escaped, taking the frozen subjects with her. Several months later, Leon was the first to be thawed. His powers and competitive nature made him ideal soldier material to Baiul who added him to DV8. DV8's original leader was Threshold, but he and his sister Bliss were never considered part of the team by the other members, presumably because they already were involved with I.O. before Project: Genesis. DV8, nicknamed the Deviants, were sent on many dangerous missions and Baiul always made it clear to them that they were expendable to her. To survive in this lethal environment, the Deviants became tough and amoral. One of the few Deviants to retain any sort of moral compass, Leon became sick of the death and violence that were a part of being in DV8.

When Ivana blackmailed herself back into I.O., the team became I.O. agents. Leon saw this as an opportunity to atone for their crimes and when Threshold betrayed the team, Leon decided to quit. Frank Colby, the I.O. agent who had taken over DV8, convinced Leon to stay and become the new field leader of DV8. Colby convinced Leon that he was the only one all the others in the team looked up to and that without him DV8 would disband. Leon didn't have any loyalty towards I.O., but he knew that Colby was right when he said that some of his fellow Deviants wouldn't be able to survive in the outside world.

On a mission, Frostbite came into contact with the villain Arthrax, who used his addictive touch upon him. During this mission Leon was forced to push his powers beyond their previous limits and was taken back, seriously injured. When he recovered his powers were gone. Shortly afterwards Ivana fired Leon. Outside, Frank Colby talked to Leon and asked him to join a conspiracy against Ivana. Leon, who was sick of Ivana and her ways, agreed and went home to his mother. There Colby's men exchanged Leon with a body-double and transplanted the tracker Ivana had implanted in all DV8-members to the double. Ivana had the double killed shortly afterwards and Leon was now officially dead. Colby's men introduced Leon to his fellow conspirator, Stephen Callahan, father of Threshold and Bliss. With Callahan's help, Leon's powers were restored. Shortly afterwards DV8 member Sublime joined the conspiracy as well and they went against Ivana and I.O. The battle would mean the end of DV8.

Leon joined with teammates Sublime and Copycat to try and lead a normal life. They were joined shortly afterwards by Genevieve Cray, a female clone of Michael Cray, Sublime's father. Under Cray's leadership the group battled the villain Trance and his group. Trance captured Leon and Sublime and used his mind-controlling powers to make them kiss each other. Frostbite and Sublime had had some sexual tension towards each other for a long time and Trance noticed this. He ordered them to go further when Cray and Copycat stopped him. Trance and his team were defeated, but Leon and Sublime admitted to each other that it hadn't been all bad and tentatively started a relationship.

Retrieved from "https://imagecomics.fandom.com/wiki/Leon_Carver?oldid=49749"
Community content is available under CC-BY-SA unless otherwise noted.