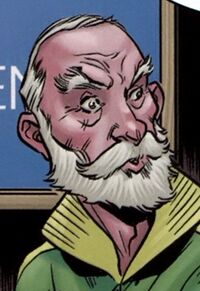 Lester Majak grew up in a fat-town with many unmotivated people. He vowed to begin working out to escape. He eventually reached fame by starting a television show and home workout DVDs. He quickly was drawn to what fame could buy him, sex, drugs, and more.[1]

Over time, he started to realize what was really important in life and returned home to Wisconsin. He couldn't' completely abandon his lifestyle and was frequently the victim of speeding tickets. He'd flirt with Bonnie at front desk of Rothschild Police Department to get out of them.[2]

Lester began hearing noises outside his home. He headed to the bar to find some women in an attempt to not sleep at home.[3] May Tao tracked down Lester Majak's home due to her being kidnapped by someone who she thought was under the orders of Lester. She pretended to run her vehicle off the road and need to use his home to keep warm. She recorded their conversation. He told her how he grew up but soon calls her out on why she's there. She admitted she was abducted by Blaine Abel. He had a message on his phone from Lester asking for Abel's help. Lester walked her to the garage to show her a damaged snowmobile and he was only asking for help on fixing his snowmobile. May felt horrible having assumed the worst and left him in his home.[4]

Retrieved from "https://imagecomics.fandom.com/wiki/Lester_Majak_(Revival)?oldid=41251"
Community content is available under CC-BY-SA unless otherwise noted.