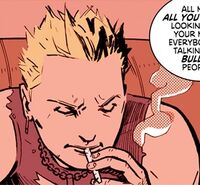 Lex is soon if be a powerful crime syndicate member due to his father. He frequently puts people down to make himself feel better.[1] Lex is known in the King's Dominion Atelier of the Deadly Arts as the most skilled with bombs and explosives.[2]

When Saya discovered F-face was holding Chico's dead body at the Tenderloin, Lex agreed to participate in the raid.

It was Lex's duty to perform a diversion at the beginning of the raid, an explosive collision between a stolen mail truck and another van driven by Maria. After a messy, but successful extraction of Chico and execution of F-face, Lex casually walked down an alleyway towards the back entrance where Maria, Marcus, and Willie were being apprehended by el Alma del Diablo. Lex was shot in the face immediately after rounding a corner, effectively sparing Willie from being executed. His death also served as a distraction that allowed Maria, Marcus, and Willie to escape.[3]

Retrieved from "https://imagecomics.fandom.com/wiki/Lex_(Deadly_Class)?oldid=66638"
Community content is available under CC-BY-SA unless otherwise noted.