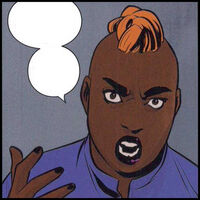 She traveled to a planet when the Revolution's leader, Quain, worked out a deal to pick up a hybrid and bring it back to the Vez and the high council.[2] However, things went wrong and several Revolution members died in the struggle.[3] As Lexis and Zizz attempted to escape with the hybrid, Hazel, they were boarded by Royal Guard members. When Zizz died moment before they were boarded, Lexis and Klara agreed to a cease fire in order to get out alive. They fabricated as story that they were sex slaves. The robots then sold the trio to a detention center under Landfall Coalition control.[4]