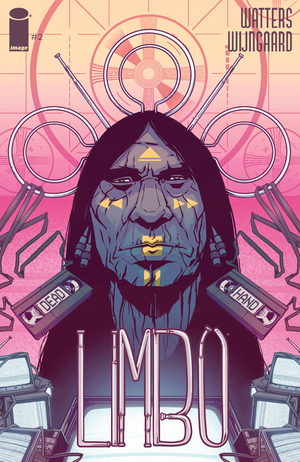 I don't have any tricks. Special effects? perhaps. You can't trust anything you see on TV.

In her apartment in Dedande City, Sandy is surprised that Mr. Clay caught the murder on tape. She says she's going to take off as she has other deities to harass.

As Clay watches the footage, he notices the strange man is suddenly in the shot. When the man turns around and breaks the fourth wall and looks at him, the man reaches through the television set and pulls him inside. Clay finds himself drifting from channel to channel until he finally meets the man. The man introduces himself as a teleshaman.

They turn their attention to Sandy's TV. They see she is summoning Papa Legba, a god that manifests itself in exposed cassette tape. The God insists she cut her pet lose or keep an eye on him. Legba warns her that he is dangerous and she needs to get rid of him but she refuses.

When Sandy walks into the next room where Clay is supposed to be, she's surprised to find Clay is missing. She calls out to Papa Legba and asks for his help. She grabs a remote and takes control of an 8-bit game and beats the Teleshaman as Clay in a game. Soon, Clay is spit out through the tape player. He looks back and sees his evidence is ruined.

Our detective's open and shut case takes a turn for the surreal as he discovers that in Dedande City even watching television can be deadly. Join us on a cathode ray fuelled nightmare to the centre of the televerse. We're through the static now...

Retrieved from "https://imagecomics.fandom.com/wiki/Limbo_Vol_1_2?oldid=52075"
Community content is available under CC-BY-SA unless otherwise noted.