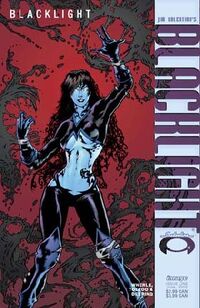 After the death of the first Blacklight. The "Dark Matter" that gave him his powers finds a new home inside innocent bystander, Lina Juarez, giving her the power to change her life as the new Blacklight. ShadowHawk meets her and looking for a mysterious "Corpse" who is killing people. Blacklight is looking for the origin of her newfound powers. The two team up to bring the vicious monster down -- the first Blacklight, the man Eddie killed.

Later Blacklight, coming to see him, thanks him for her namesake's merciful death and helps Eddie Collins stop Luke Hatfield JR, aka Hawk's Shadow. After Bomb Queen, in disguise, travels to Las Vegas in search of weapon prototype at a gun convention and runs into Blacklight, also visiting Las Vegas for a comic convention.

After she and Shadowhawk's girlfriend Rebound face off in New Port City's Bomb Queen.

Retrieved from "https://imagecomics.fandom.com/wiki/Lina_Juarez?oldid=49364"
Community content is available under CC-BY-SA unless otherwise noted.