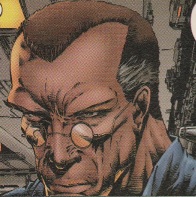 Lincoln Adams, simply known as Link, is a chief engineering officer employed on Skywatch. His duties involve supervising all technical aspects of Skywatch and its peacekeeping team StormWatch. Lincoln Adams was first introduced in Stormwatch #13 in September of 1994.

Lincoln Adams is veteran of life and has a wealth of experiences and advice. He was the good friend of Jackson King's father Isaiah King during the turbulent 1960s in the southern United States. Link went on to be Jackson's close friend during their time together on Skywatch. He would often time provide Jackson with advice on his romance with Synergy. Aside from personal consultation, Link often time lent technical support including developing new containment suits for the energy beings Fuji[1] and Hellstrike[2]. Link also reconstructed the badly-damaged Spartan unit after his body was recovered by Stormwatch during the wake of the Wildstorm crisis[3].

During the Wildstorm crisis, Link was assigned by the United Nations council to release Despot and the Warguard from cryogenic suspension in a last-ditch attempt to defeat Lord Helspont. Despot refused to cooperate, consequently killing the entire security team except Link. He spared his old friend so that he could deliver a message from Despot, declaring the Warguard's newly-attained freedom.

During the Despot crisis, Link and Spartan worked together on a contingency plan that involved designing special collars that would mask the wearer's mental signature from Despot's mind-probing powers[4]. Per orders of Synergy, Link was to immediately board an escape pod before the primary phase of Stormwatch's plan occurred: crashing the Skywatch space station into the Death Valley desert of Earth's United States. After the crash failed to kill Despot who was lured onto the station, it was not clear as to the fate of Link, but his later appearances helping Marc Slayton confirm that he survived.

Retrieved from "https://imagecomics.fandom.com/wiki/Lincoln_Adams?oldid=63485"
Community content is available under CC-BY-SA unless otherwise noted.