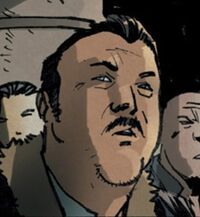 Officer Link has worked with Sheriff Crane on several emergency issues in Buckaroo. He recently helped gain order at the hospital when a mob attacked Edward Warren for allegedly biting Eliot Carroll.[1]

When Sharon stepped over the line and attempted to sneak Warren out of the state, she was relieved of duty as the Sheriff of Buckaroo and Officer Link became the new Sheriff.[2]

Retrieved from "https://imagecomics.fandom.com/wiki/Link_(Nailbiter)?oldid=48043"
Community content is available under CC-BY-SA unless otherwise noted.