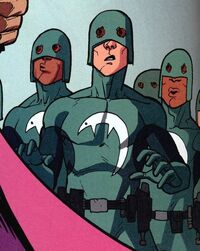 An evil organization of lizared-themed super-villians run by King Lizard. They are responsible for the deaths of Kate Cha and Shrinking Ray.

The league was first seen attacking a building and trying to steal some kind of canister, but was easily stopped by Invincible and Atom Eve. The leader, King Lizard, swore this wouldn't be the last time Invincible saw them. The Lizard League was secretly being led by King Lizard even in jail, but when his order cease, Supreme Lizard tried to takeover until King Lizard returned and killed him. He revealed the reason his orders ceased was because he had escaped.

For King Lizard's first mission since his return, the team took over a nuclear missile silo. Despite Rex-Splode, Shrinking Ray, and Dupli-Kate showing up. Despite the deaths of Iguana and Salamander, Komodo Dragon was easily handling the team and even killed Shrinking Ray and Dupli-Kate leaving Rex-Splode against the behemoth. In a last ditch effort, Rex let Komodo bite off his hand while there was still an explosive in it. Rex's relief was cut short when King Lizard pulled a pistol on him. Rex dealt with a gunshot and fought King. The two of the passed out and Brit came to save them both. [citation needed]

Retrieved from "https://imagecomics.fandom.com/wiki/Lizard_League?oldid=25347"
Community content is available under CC-BY-SA unless otherwise noted.