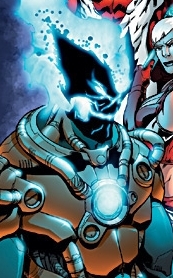 This is a foul planet, polluted with vile inhabitants, and it has earned each and every horror that i will now inflict!

Helspont is a Daemonite, an alien with the ability to possess other creatures. The Daemonites were at war with the Kherubim. Helspont managed to take over a powerful Acurian, a species with incredible mental powers, as his host body. As a Daemonite Lord, Helspont was appointed military commander of a Daemonite spaceship, though he had to share command with two other Daemonite Lords. The vessel encountered a Kherubim vessel near Earth and a battle begun that ended with both vessels crash-landing on Earth, killing one of the Daemonite Lords.

On Earth, Helspont took control over most of the surviving Daemonites, claiming the title of High Lord. He founded the Cabal, a criminal organization, aimed at world conquest and the ultimate goal of Daemonite Reunification: a return to Daemon. He constructed a submarine, known as the Behemoth, as his base of operations. Helspont battled the surviving Kherubim on Earth for centuries, but without much success. His attempt to take control of the nuclear arsenal of the USA failed when Team One stopped him. At a later time, he nearly succeeded in opening a portal to Daemon, but his plans were foiled by the WildC.A.T.s. Soon after his defeat by the Wildcats, Helspont along with his rival Daemonites Lords, Defile and Hightower, attempted to reactivate the Daemonite vessel, which was found during an archeological dig. The vessel turned out to be the Kherubim vessel instead and the WildC.A.T.s took it off-world before it could be destroyed. The WildC.A.T.s used the vessel to travel to Khera, home of the Kherubim, where they discovered that Khera had defeated Daemon centuries ago.

Returning to Earth, the Daemonites soon came to learn of their defeat. Helspont visited Gen¹³, claiming to be a superhero now that the war was over, but it turned out to be a ruse. He was defeated and retreated.

Recently Helspont has taken the human disguise of Mr. Wyvern, a rival of Mister Majestic's friend Desmond. Both Desmond and Wyvern lead large companies that produce extraterrestrial technology for human use. When investigating a Kherubim World Shaper Engine, Wyvern revealed his true self and used Desmond's cybernetic body to communicate with the Shaper Engine. He discovered that the Daemonites were created as a servitor race to the Kherubim. He battled Mister Majestic and Zealot and escaped when the Kherubim Shapers Guild arrived on Earth. When the Shapers Guild attacked Daemonites, Helspont forged an alliance with Mister Majestic against their common enemy.

He engaged in battle against the Shaper's Guild and his physical body was destroyed, forcing him to transfer into the body of Desmond, who was still connected to the World Shaper. He tried to secure the artifact for himself, but became locked into a contest of endurance with Majestic, who continually initiated lock-out codes to thwart Helspont's hacking. Over the course of several weeks, Majestic was pushed to the limits of his endurance, until the Engine shut down of its own accord, as all animal life on the planet Earth mysteriously disappeared. Majestic destroyed Desmond's body with Helspont in it.

In the first issue of WildCats vol. 4, it has been revealed that in the rebooted WildStorm Universe, Helspont is not only alive, but reportedly allied with Kaizen Gamorra. It has also been stated that rather than being a Daemonite possessing an Acurian host, Helspont is a Daemonite central mind given body when the population reaches a certain density.[1]

As a Daemonite, Helspont has access to highly advanced technology. As High Lord of all Daemonites on Earth, he can command dozens of Daemonites to do his bidding. There are Daemonites who don't obey him though, like Lord Defile and Hightower. Furthermore many Daemonites deserted after hearing about the end of the war.

In the WildC.A.Ts cartoon 'Maurice Dean Wint' provided the voice for Helspont.