Chief Banks was the chief of the New York City Police Department and worked out of the 29th precinct with Sam Burke and Twitch Williams.

Spawn obtained evidence that Chief Banks was involved in Billy Kincaid's murder of Senator Jenson's daughter.[1] He delivered this information to Sam Burke and asked him to inform his boss to leave Terry Fitzgerald alone.[2]

When Sam read the file, he realized he had information that could be used to blackmail his corrupt boss.[3] Sam sent an anonymous letter to Banks informing him that someone knew about his illegal actions.[4] Banks became worried and immediately called Wynn, the real mastermind behind the plot.[5]

Sam and Twitch continued their investigation of Banks. They got his phone records from his office to learn who Banks was calling.[6] When Banks is tipped off by a fellow Officer that Sam is investigating him, he calls Wynn in panic again. When charages against Banks are made and cleared instantly, Burke realizes he needs more detailed evidence to pin Banks.[7]

Banks eventually fires Twitch and Sam after waiting an adequate period of time to make it not look like he was firing them for their charges against him. The ball was already set in motion and Jason Wynn saw this pieces falling around Banks. Rather than save him, Wynn allows the blame to fall on Banks and cuts all ties with him. As internal affiars appears to take Banks away, Banks locks the door to his room and blows his brains out with his pistol.[8] 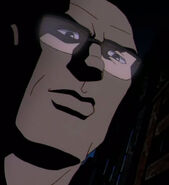 Chief Banks on the HBO series Todd McFarlane's Spawn.
Add a photo to this gallery

Retrieved from "https://imagecomics.fandom.com/wiki/Louis_Banks?oldid=31906"
Community content is available under CC-BY-SA unless otherwise noted.