"Chapter One: The Delirium of Hope" 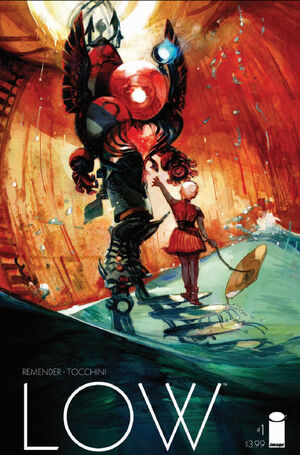 Appearing in "Chapter One: The Delirium of Hope"

Plot Synopsis for "Chapter One: The Delirium of Hope" 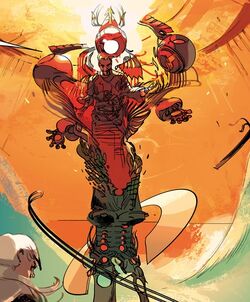 Johl Caine thinks about how Earth is approaching a fiery end as the sun expands into a super-nova. They live in an underwater town called Salus to avoid the Sun's harmful radiation. He thanks that even in despair that his wife, Stel Caine, is endlessly optimistic.

Stel gets up from bed after making love to Johl. He teases her about her endless checking of probes reporting on their inhabitable world search. She reminds him he needs to prepare for a hunt and to not worry about her obsession. She tells him about some ideas that some of the probes have broken communicators and that's why they haven't discovered any new world. If she could call them back to Earth and manually check if they've found inhabitable worlds they may learn something new. She pleads for him not to take their two daughters out to train how to hunt, but he insists they beg him to go on a journey. He tells her they have the Caine blood in them while Marik inherited her Blue blood.

Della bursts onto the scene exuberant to begin training. Johl smiled at her Caine blood response. He begins teaching them of two shells that glow when they are being true to themselves. He hands it to them and to watch them closely.

They approach their ship as Marik Caine swears and curses at attempting to fine-tune its mechanics. Johl offers a chance for him to join them and he refuses stating that hunting isn't in his blood. Johl boards the ships and the daughters are amazed by the Helm Suit.

They talk off in the ship to hunt, and Johl shows Tajo the suit. Stel announces on the intercom that she's spotted a Mammoth. Johl is shocked that they'd find one so low. As Stel has the ship approach the Mammoth, it squirts ink and behaves in patterns that she hasn't seen before. When the ink dissipates, Stel realizes it's a trap and Scurvies board their ship. When the Scurvies hold their lazer sights on Tajo, Johl hesitates to move at the fear of losing his daughter.

Suddenly, Stel jumps out of the hatch surprising the men. She orders Della to stay inside the navigation pit. When a Scurvy surprises Stel from above, she is disarmed and held ransom as well. The leader tells them just because he was born outside of Salus' walls, does not mean he is slow. He tells them he's learned the suits are DNA encoded, but only optically. He uses his hook to remove Johl's eye so that he may activate the suit. Della jumps out and impales the leader with a harpoon. She's quickly disabled and the leader takes Johl's removed eye to the suit to activate it. He tells them that he's taking their daughters to ensure he has enough Caine blood to power the suit.

The Scurvies take off with the two girls and plans to raise Salus. They sink the ship with the Johl and Stel still on-board.

Retrieved from "https://imagecomics.fandom.com/wiki/Low_Vol_1_1?oldid=68837"
Community content is available under CC-BY-SA unless otherwise noted.