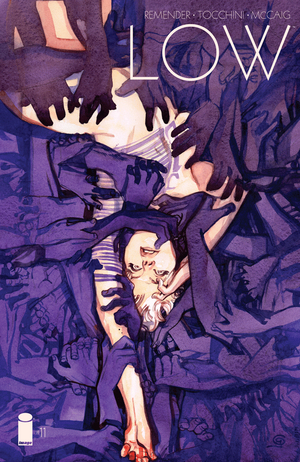 I'm not like you. You're terrified of everything except wallowing.

Della Caine and Tajo Caine return to Salus. Della reminds Tajo they need to charge the suit as it's been 10 years and plays the role of big sister as she bosses Tajo around. Della unlocks the Caine family room to charge the Helm Suit and Tajo is surprised she had access. Della reminds her that their father thought she would be the one to inherit the suit so encoded security for her.

As the two sneak in, Lena speaks with a crowd of senators and notices them.

The duo return to their home where Tajo takes a moment to watch holograms of past family memories. Della quickly gets down to business and tells her it's a waste of time and they need to stock up on supplies. Tajo pushes her to accept her feelings. She tells Della she's sure she flinched and she has to admit that mom always returned home from seeing Masaje feeling better about life. Della snaps back that the faith never helped anyone. She tells her she spent five years on Voldin believing she was a failure in not believing things would get better.

Meanwhile on Voldin, Czar Dvonyen is fed a report that they discovered a letter from Della. The letter is from Della and she claims is chasing after the woman chasing the probe so that she can stop people from having a false sense of hope. The Czar knows it's a lie and that she's returning to Salus. He orders his troops to prepare to attack Salus before then attack them.

On Salus, Tajo returns to her room and sees the sun and moon rooms which was her sister's and her's respectively. She recalls the story she hear how the sun and moon shared the sky. One day, the sun offered to consume the moon so as to better serve the people. She did, and lost her power as a result of fear. Suddenly, Lena walks in the room and introduces herself as Marik's ex-wife. She tells Tajo about his fall to the Cream. In return, Tajo tells her how they plan to head to the surface. Lena offers her Subx to them as the Helm Suit won't carry them both.

Meanwhile, Della visits the Masaje. When he tries to feed her stories of faith, she murders him.

She returns to the Helm Suit at the same time as Tajo. Tajo introduces Lena and hugs Della. She affirms that she's happy she's been returned to her life.

Sisters Tajo and Della Caine return to their family home haunted by ghosts of their past. Do they seek blood or redemption?

Retrieved from "https://imagecomics.fandom.com/wiki/Low_Vol_1_11?oldid=68843"
Community content is available under CC-BY-SA unless otherwise noted.