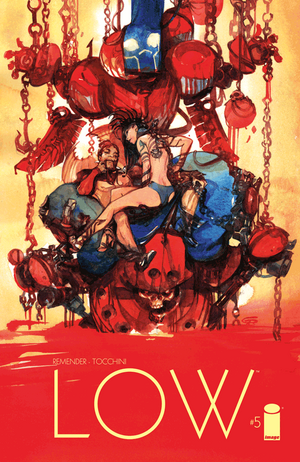 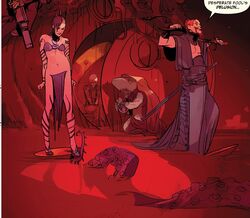 Four months later on Poluma, Roln continues to press Stel Caine on how to invade Salus and the location of the crashed probe. He tells her he enjoys breaking optimistic people.

Roln exists and speaks with his brother, Grolm. He promises him they'll return to the surface one day.

Elsewhere, the Mutineers Brigade are introduced to the coliseum. A group who has won 89 straight battles without a single fatality. Marik Caine tells a fellow gladiator that he has to have positive thoughts, and he will be fine in battle. Roln introduces the group and secretly asks Grolm is he's able to telepathically control the beast to ensure defeat. Grolm tells them they won't survive the battle and that a large chunk of money has been placed on them losing. To distract them, Roln brings out Stel. She yells down to Marik to kill them all.

The heroes are quickly dropped into the tank. The Eel moves to fast and swallows Marik in one bite. Roln grabs Stel and demands to know the location of the probe. He says Tajo Caine will be next if she doesn't reveal its location. He says he'll tell her what he did with Della as well.

Inside the coliseum, Marik suddenly explodes out of the belly of the eel. He makes an announcement to the crowd they need to rise up against Roln. Grolm releases the Mammoth Isopod, a gigantic squid and crab like sea-creature.

Meanwhile, Stel tells Tajo to help her. Tajo turns in rage and attack Stel telling her, that her mother and brother would never have abandoned her. She rips her Truth Shell from her neck and tosses it over her shoulder.

Grolm activates his Telepathy and forces one of Marik's men to stab him in the back.

Retrieved from "https://imagecomics.fandom.com/wiki/Low_Vol_1_5?oldid=68840"
Community content is available under CC-BY-SA unless otherwise noted.