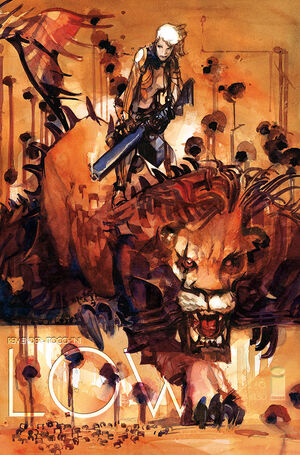 Marik Caine recalls fixing and cleaning the Truth Shells for his sisters as a young boy.

In the present, Marik spots the Truth Shell falling to the floor next to him. Marik uses it to vanquish the Mammoth Isopod with its light. Everyone is in shock that it was stopped by a bright light and Grolm warns them the creatures from the dark are not used to bright lights.

The Mutineers Brigade pull Marik to safety. Marik makes his announcement again that the people must rise up against their oppressive ruler, Roln. Seeing that the crowd is turning on him, Roln jumps down to battle Marik. He orders his lackeys to keep his other warriors busy as he handles Marik.

When the mob starts to climb and attack Tajo Caine and Stel Caine, Marik turns to throw his lance at their attackers sparing his sister's life. However, while his back is turned Roln stabs Marik. In his final breaths, Roln removes Marik's eye the same way he did his father's before him. Roln then heads to the Helm Suit to pilot it with Marik's genetically compatible eyeball.

Upon arriving, he finds Tajo already entering the suit. She activates it and smashes Roln, killing him instantly. She returns to grab Stel and her Mutineers Brigade. She sends the three of them off in a Subx. She tells Stel she's not going with her as she needs to find her sister. He says she made a promise to destroy Poluma. She hovers over the city and fires the Helm Suit missiles to demolish the entire city.

Retrieved from "https://imagecomics.fandom.com/wiki/Low_Vol_1_6?oldid=40142"
Community content is available under CC-BY-SA unless otherwise noted.