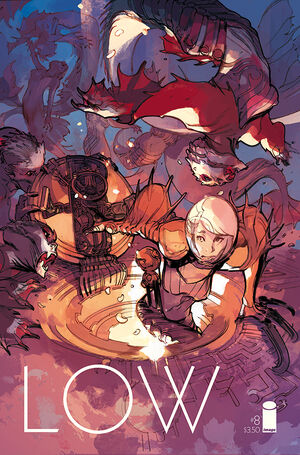 His mind fixated not on a future of self-preservation, but of serving the greater good.

In a bee colony, they give birth to young larvae. A probe lands in the nursery area and the young larvae surround the probe.

Elsewhere, Stel Caine, Mertali, and Zem travel to towards the surface in pursuit of the returned probe. The stumble upon Misalt, an old city abandoned in pursuit of lower depths to avoid the radiation of the sun. Stel begins to give up on hope but Zem tells her they may find air and supplies in Misalt.

Zem introduced himself as Zem Gotir, a putrid man who once served in Roln's army. He grew a gambling addiction and needed to sell his family into slavery to pay his debts. Mertali was ready to murder Zem for being a monster but stopped. She handed the knife to Stel and said she refused to sully the blade.

Stel thinks back to when she first joined the church of Quantumolgy. While pregnant with Marik, became concerned about his future in a bleak and dying world. Masaje told her that Quantumolgy had kept the people alive for a millennium and that her son's future relief on her faith.

Retrieved from "https://imagecomics.fandom.com/wiki/Low_Vol_1_8?oldid=40143"
Community content is available under CC-BY-SA unless otherwise noted.