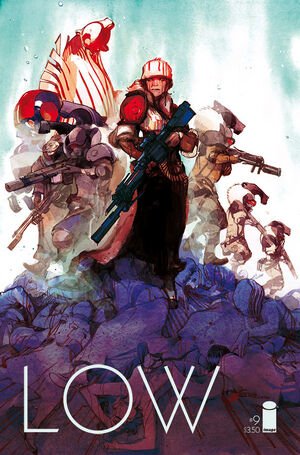 I understand you've hurt my sister.

Ten years ago on the Subx, Tajo Caine and Della Caine are taken hostage. Della pushes Tajo to remain positive as it's what their Mother would have wanted.

Zem grabs Della by orders of Roln. He tells them they both will have new homes and forget where they came from. Zem and Roln introduce Della to Czar Dvonyen, the leader of Voldin. They inform Dvonyen she is a helmsman and he instantly agrees to bargain with Roln. He tells him to name his price and he agrees to exchange air and food for the girl.

In the present, the Czar yells at the Ministry of Thought. He tells them the dangers of hope will cause an uprising with the people. He demands the people producing art to be brought to justice and murdered. He tells them about a probe being returned to earth by scientists from Salus. He says it's unlikely if the probe detected a new world and most likely just malfunctioned. He quizzes his men to see if they should go after it. When one man says no as it is improbable, he is instantly shot in the face. The Czar reminds them it would give them hope, only to be crushed which is dangerous. They would tear themselves apart in grief.

Della heads out and kills many civilians attempting to find the killer of the last artists, which happened to be her. She threatened Jelric, a man who previously moved art. She receives a sudden call from Lieutenant Wesal.

She heads out to meet him at a location he claims rebels are printing the story on the probe being found. She was told the identity of the assassin, her, was also to be discovered. However, upon arriving she enters a viscous battle with Wesel. He realizes it was a trap. Wesel disarms her and tells her he secretly has been working with artists and infiltrated the Ministry of Thought to learn insider tips. He's furious that she killed K-003, better known as Kelli Torjvic, who had contributed so much beauty to the world.

They are suddenly interrupted by Tajo arriving in a Helm Suit. She destroys all the rogues Ministry of Thought members and saves her sister. She informs Della that their mother is alive, and they she'll take her to see her. She believes Stel needs Della's optimism. Della agrees to have her taken.

Retrieved from "https://imagecomics.fandom.com/wiki/Low_Vol_1_9?oldid=68842"
Community content is available under CC-BY-SA unless otherwise noted.