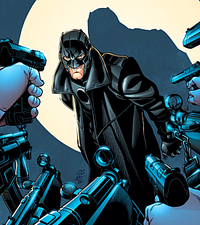 Midnighter is a comic book superhero, best known as a member of the rogue superhero team, The Authority. Created by writer Warren Ellis and artist Bryan Hitch, he first appeared in Stormwatch #4 (vol. 2), before going on to appear in various Authority books and series, and his own eponymous ongoing series. He was created in the archetypical vein of Batman, but unlike Gotham City's protector, Midnighter has superhuman abilities.

Midnighter is notable for being one of the few gay superheroes in print. He's married to fellow Authority member Apollo and both have adopted Jenny Quantum.

Midnighter is rarely seen without his costume. The few times he has appeared without a mask have revealed both short blond or brown hair. In an issue of Stormwatch: Team Achilles he admits he's a redhead but dyes it blond.

Midnighter, alongside his future husband Apollo, was part of a top secret Stormwatch team created by the first Weatherman, Henry Bendix. Nobody but Bendix himself knew of the team's existence. Bendix built them as superhuman and, when they donned their costumes and spoke their codenames, their previous identities ceased to exist.

However, this secret team was all but destroyed during their first mission, Apollo and Midnighter being the only survivors. They went rogue and spent the next five years undercover fighting for a finer world in the alleyways of America. One mission took them to Britain, where they thwarted Bendix's attempts at experimenting on children to create superhumans, in the process developing links with MI5. They remained unknown to Stormwatch until Christine Trelane found the files about their team after Bendix's fall.

Jackson King, formerly Battalion, now the new Weatherman, ordered them found, not being sure whether they were heroes or villains. Midnighter and Apollo were after weapons made in the "Nevada Garden", a relic of the first Engineer. He ordered Fahrenheit and Hellstrike to tag them with fetishes so they could be transported into SkyWatch. Midnighter and Apollo first attacked the Stormwatch team, believing them under Bendix's orders. However, they ceased the attack once they were told Bendix was dead. With King's help, they violently retrieved the Garden from the U.S. Army, and King granted them what they asked for: new lives away from Stormwatch.

This story is available in the Stormwatch TPB A Finer World.

After Stormwatch was destroyed, Jenny Sparks convinced both Midnighter and Apollo to come out of retirement and join her new group, The Authority. A formidable fighter with a sardonic attitude, Midnighter epitomised the new team's commitment to fighting for a finer world, including against vested interests and world governments. Midnighter and Apollo's relationship, though hinted in previous issues, was revealed in The Authority #8. He was the architect of the team's first significant victory, the defeat of autocratic dictator Kaizen Gamorra, which he achieved by dropping the 50-mile-long Carrier on to Gamorra's island base.

During the Transfer of Power storyline, Midnighter was the only Authority member to evade capture when the US government had the team attacked and replaced with manipulable substitutes. Presumed dead, Midnighter had in fact escaped the Carrier with baby Jenny Quantum. He returned to overthrow the puppet team and rescue Apollo from imprisonment and abuse at the hands of their replacements. Shortly thereafter Midnighter and Apollo were married and adopted Jenny.

Midnighter took a central role in Ed Brubaker and Dustin Nguyen's Revolution maxiseries. A visitation, apparently from a future Apollo, convinced Midnighter that he was on the path to becoming a malign dictator. To avoid this fate Midnighter quit the team, precipitating its break-up, and returned to life fighting solo on the streets. Raised alone by Apollo, Jenny exploited her powers to age herself to young adulthood and reformed the Authority. Having convinced Midnighter to rejoin the team Jenny discovered he was being manipulated by a dimension-hopping Henry Bendix, hitherto assumed dead. Midnighter fought for Bendix before the Engineer was able to break the mind-control; Midnighter then killed Bendix by ripping out his spine.

Circumstances have twice forced Midnighter, very much against his will, to team up with Kev Hawkins, a homophobic former-SAS soldier and eponymous protagonist of the Authority: Kev miniseries (written by Garth Ennis) - a relationship made worse by the fact that on their first meeting, Kev killed him, Apollo and the rest of the Authority, though the Carrier resurrected them. On their last meeting they took down MI5's Royal Oak project, an attempt at replicating Bendix's experiments.

In November 1 2006, an ongoing Midnighter series began, written by Garth Ennis and illustrated by Chris Sprouse.

After returning from a mission in war-torn Afghanistan, Midnighter was attacked and kidnapped by unknown agents while passing through the Carrier's teleportation portal. He awoke in a facility in Hamburg, Germany, where a man named Paulus told him that he was disrupting his ability to guess his opponents' moves, and that he had removed his secondary heart and replaced it with a remote-detonated bomb. Paulus gave Midnighter the choice of either working for him, or dying, showing him a photograph of the person he wanted Midnighter to kill: Adolf Hitler. Time-travelling back to the First World War trenches, Midnighter encountered Hitler as a young corporal in the German army, but was apprehended by 'time police' officers from the 95th century before carrying out his mission. In his struggle to escape, he crashed the officers' time machine at the year 1945 -- shortly before Hitler's expected suicide. Eventually he allied himself with them and worked his way back to his own time, where he threatened to erase Paulus from history by killing his kidnapped younger self; it is unclear whether or not he would have executed the child, but ultimately he did not have to. Midnighter then returned to the Carrier, but was apparently just as listless as before, immediately setting himself on another mission in Iraq.

Christos Gage's Midnighter #8, illustrated by John Paul Leon deals with Midnighter's attempts to connect better with humans after the graphic and public disposal of supervillain "Suicide King". Trying to help a girl find her pet cat finds him stumble upon a mad scientist who has been kidnapping pets for his cybernetic experiments. After defeating him, he employs the scientist to experiment on the murderers and dictators he acquires before deciding to adopt the one pet the Doctor could not repair or rehome: a cyborg dog.

In March 2007 a mini-series, Grifter & Midnighter, charts the team up between Midnighter and Grifter. It is written by Chuck Dixon, with art by Ryan Benjamin. [1]

In Wildstorm Winter Special 2005, a story called Apollo & Midnighter: Two Dangerous Ideas features their alternate reality analogues, Pluto and Daylighter, with inverted color schemes to match. At first the real Apollo and Midnighter believed that they were their homophobic counterparts, but later learned that they had broken up.

Issue #6 of Midnighter's solo series starred a nameless, super-skilled swordsman from feudal Japan who fell in love with a peace-seeking Chinese warrior much like Apollo. This swordsman had powers similar to the Midnighter's future-sight and super-strength. An oddity of the issue is that the heroes are ostracized for their homosexuality, despite there being a fairly high tolerance for such behavior in ancient Japan.

Retrieved from "https://imagecomics.fandom.com/wiki/Lucas_Trent?oldid=62872"
Community content is available under CC-BY-SA unless otherwise noted.