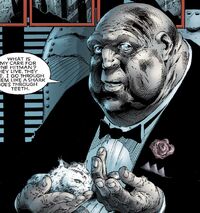 Luciano Bartino is one of the most powerful dons in the Italian Mafia. When his hitman, Nicholas Rocca was gunned down, his brother, Eylan Hessman offered his service to rebuild Rocca into a one-man army, Overt-Kill.[1]

When Spawn disabled Overtkill and was unable to return him, Bartino sent his men after Twist. However, it was a ruse to attack the Order of the Knights Templar who had a member secretly hidden in Twist's organization.[3]

Retrieved from "https://imagecomics.fandom.com/wiki/Luciano_Bartino?oldid=68332"
Community content is available under CC-BY-SA unless otherwise noted.