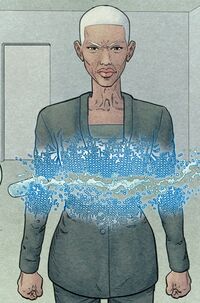 Ma'am interrogated Pittiulak when he was caught stealing water form American troops. She was soon summoned to Colonel Storz and informed of losing contact with an All-Terrain Vehicle in Yellowknife. Concerned it was a forming resistance group, Ma'am recommended sending troops to the area to squelch and resistance. [1]

Soon, Victoria McFadden was captured and brought to Ma'am for interrogation. After she resisted a brutal Virtual experience of being drowned and burned alive, Ma'am instructed a new program to be implemented. She had a virtual reality version of her deceased father appear to her and threaten to rape her. In return, McFadden quickly broke down and informed her the Two-Four were held up in an underground cave. Ma'am then dispatched Team 60 to go after the hideout.[2]

Ma'am soon used her virtual interface to meet with a senator in South Burlington. He informed her the terrorist group she's investigating in Yellowknife blew up a desalination plant in Salt Lake City. She was told the goal is to inform people the fight isn't with the U.S. Government, but it is with terrorist organizations. He shows her pictures of people righting around water treatment plants across the US. Ma'am suddenly realized he was pinning the blame on the Canadians to control the people to his cause of war.[3]

Later, Ma'am received a transmission from her American soldiers that Amber and her crew planned on marching on their base. She orders her men to make Les LePage public enemy number one when she spots he is with Amber. However, another soldier ran into the room and informed them they were under attack by the Canadians. As their Whitehawk docked in a landing bay, Ma'am met them with a laser and killed Highway. When she turned the gun on Amber, Amber opened her jacket and revealed she was rigged with explosives.[4]

Ma'am tried to reason with Amber. When troops came to intervene, Ma'am shut the doors on them. Ma'am explained that she was born a Canadian but moved to America when she was just a little girl. Ma'am told Amber she was aware that Amber didn't come to kill her as she would've done it already and knows she had demands. Ma'am was told to leave Canada and explained she couldn't just turn her fleet around. Ma'am was then told she wanted all of America to leave Canada. Ma'am was told that Amber believed she bombed the White House as an excuse to invade Canada. Ma'am then presented a recording of a man confessing during an interrogation. Amber told her that she believed it wasn't real or they made him do a false confession. Their ship was then attacked. Ma'am saw Amber about to pull the trigger and jumped Amber. Ma'am told Amber she could spoil North America's last reserves of clean hyrdro if she took the ship down. Ma'am was elbowed in the face by Amber who told her hydro is what they called power in Canada. Ma'am was asked if what she said was true about the White House bombings and Ma'am stated every word of it was. Ma'am was then told that when she blows up a kids parents, she would get her as Amber detonated the bomb, killing the two and everyone else on the ship.[5]

Retrieved from "https://imagecomics.fandom.com/wiki/Ma%27am_(We_Stand_on_Guard)?oldid=51992"
Community content is available under CC-BY-SA unless otherwise noted.