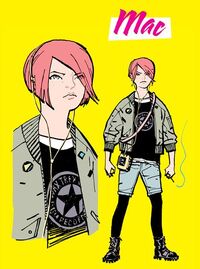 MacKenzie Coyle was the first paper boy who wasn't a boy in Stony Stream. She inherited the route from her older brother. It is implied that she or some of her close family members have had brushes with the law, as she is harassed by a Stony Stream officer in the first issue. Due to her family circumstances, she tends to have a worldly and cynical life outlook, as she reveals that her father believes that newspapers are a dying business, and in later issues is resigned to her perceived fate that she will die young. She also seems to have an antisocial streak, as she seems to have a callous attitude towards those clients that don't pay on time, and is a smoker despite being a juvenile.[1]

Erin Tieng ran paper routes for the Cleveland Preserver and would wake up early to deliver. The day after Halloween (Hell Morning) was always known to be a treacherous time for paper girls. After being accosted by older boys, she would first encounter Mac who along with KJ and Tiffany helped her. She learned on Halloween one year ago, Mac and the others banded together in a pact of mutual assistance. They rescue Erin from the boys and agreed to accept her into their group, and split up to finish their routes. Mac teams with Erin, and they keep in touch with Tiffany and KJ with Tiffany's walkie talkies, which at the time (1988) are cutting edge.[1]

Later, Tiffany is attacked and has her walkie-talkie taken from her by what appears to be a trio of ninja-garbed trick-or-treaters. The girls chased after the three assailants into an abandoned neighborhod. There they stumble upon some form of advanced machinery in a basement and were suddenly transported to another time when they got too close to the machine. They wandered outside and found things very different in their neighborhood. Mac spots the robbers and unmasks one. She revealed he was a strange looking man speaking an alien language.[1]

The girls regroup at Erin's home where they tried to dissect what was happening. It appears all the parents had suddenly vanished from town. Mac proposes they head to her home as her father has a gun. Erin tries to tell them that they should contact the authorities, but Mac picks up the phone to show there is no dialtone, thus they ride off as a pack to her house. A group of flying dinosaur-esque creatures circle above them as they arrive to the house. Inside, they find Alice Coyle, Mac's stepmom. She appears drunk and emotionally disturbed as she tells them Mac's father disappeared in thin air as soon as the creatures arrived. She then pulls out a gun to commit suicide, as she believes Judgement Day has arrived. Mac dives to stop her mother as a gunshot is fired off. The other paper girls can only watch in shock.[2]

Erin found she had been shot and needed to be rushed to the hospital. When they turned to Alice to drive, she had mysteriously disappeared like many of the other residents. Tiffany offers to drive and they hopped in. Mac argued they should bring the gun but dropped it when Erin, who had been shot, requested it to stay behind. On the drive to the hospital they were confronted by a mysterious stranger. Tiffany got out to let the man know that they needed to get Erin help and move out of the way. When he appeared hostile, KJ got out with the gun and revealed she had brought the gun anyways. However, the stranger soon had his head blown off by the ninja teenagers that stole their walkie-talkie. They removed their masks to reveal they were mutated and informed the girls that man wouldn't have helped them.[3]

They decided to return to that last place the Time Machine had been. Upon returning, they found Erin as she emerged from the machine. Erin informed them the teenagers saved her life and died in a gas leak. However, the Grandfather arrived outside the building and announced they should come out side to talk with him. He claimed everything the teenagers had told them had been a lie.[5]

Retrieved from "https://imagecomics.fandom.com/wiki/MacKenzie_Coyle_(Paper_Girls)?oldid=62470"
Community content is available under CC-BY-SA unless otherwise noted.