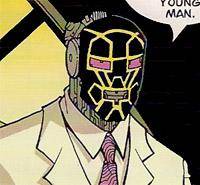 Machine Head is a crime boss with a robotic head.

Titan and Invincible arrived to take him down, but were defeated by six super-powered henchmen, including Battle Beast. All seemed lost until the new Guardians of the Globe arrived and assisted. Battle Beast, after defeating Black Samson and Bulletproof, deemed the people of this world no challenge to defeat and simply left. About this time, all the other henchman were defeated and Machine Head was brought to justice. Machine Head's assistant was Isotope, a sleazy-looking business man who abandoned him and then sided with Titan in the aftermath.