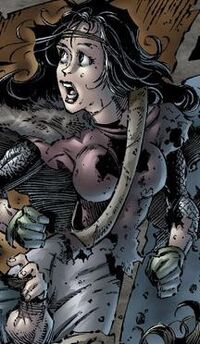 400 years in the future after Albert Simmons' death, Madrid Llanso grew up with her brother, Daniel Llanso, in an abusive home. Her father was frequently an abuser and her brother freed them from his abuse at the age of 6 by murdering their father. It wasn't until Daniel was 10 that he was finally taken away for his crimes.[1]

As an adult, Madrid had an out of wedlock son, Matthew Llanso that she cared for and raised. In a post-apocalyptic world they found themselves frequently running from Necro-Soldiers as they were pursued by the Anti-Pope and his dark forces' war Armageddon against Heaven.

When she was cornered by Desiccator, Daniel Llanso was reborn as the new Hellspawn and saved her life. Mardrid was terrified of the creature, not knowing it was her brother, and ran to a human encampment for refuge.[2]

When the encampment was attacked by Bune and his Navkies, Daniel once again came to her rescue.[3] During the attack, Matthew was taken from them by a human puppet, Abel, for the Anti-Pope. She headed to save him but was surprised when he was suddenly transported back to her by Daniel.[4]

Madrid ran once more, this time back to Caine, her current lover. There Caine concocted a plan to destroy Nu-Vatican City and hpefully free mankind from persecution. They set off a nuclear bomb armed train at the same time Daniel attacked the city. Madrid and Matthew escaped to restart life in the hell-torn world.[5]

Retrieved from "https://imagecomics.fandom.com/wiki/Madrid_Llanso?oldid=32068"
Community content is available under CC-BY-SA unless otherwise noted.