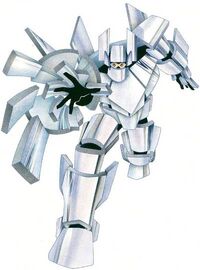 One of Machine Head's body guards. He is beaten by The Immortal and gives up on crime for a time. Later, he attempts to start a criminal empire close to the Guardians of the Globe's headquarters, believing himself to be too under the radar to be caught. Le Brusier manages to stop him.

Retrieved from "https://imagecomics.fandom.com/wiki/Magnattack?oldid=43465"
Community content is available under CC-BY-SA unless otherwise noted.