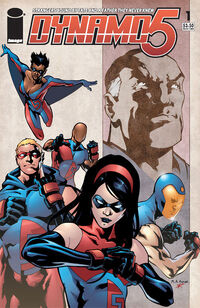 Mahmud A. Asrar (born November 20, 1976 in Ankara, Turkey) is a Turkish comic book artist known for his work on American and non-American comic books. His American work includes pinups for Savage Dragon #124 and Invincible #20, and for co-creating, with writer Jay Faerber, the series Dynamo 5, which debuted in March 2007 from Image Comics. [1]

Asrar was born in Ankara, Turkey to an Austrian mother and a Pakistani father. He expressed an interest in art and comic books at an early age.

Asrar came to the attention of Jay Faerber through his work on the independent anthology Digital Webbing Presents, and through a recommendation by Invincible artist Ryan Ottley, which led to his work on Dynamo 5. [3]

Professional History of Mahmud A. Asrar is unknown.

Retrieved from "https://imagecomics.fandom.com/wiki/Mahmud_A._Asrar?oldid=19134"
Community content is available under CC-BY-SA unless otherwise noted.