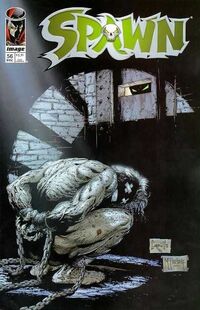 Major Forsberg was held captive in a foreign prison in solitary confinement for years. The prison was owned by Jason Wynn. Terry Fitzgerald and Spwan believed he would be valuable in bringing down Wynn as he had gone to great lengths to keep the major imprisoned. However, they soon found the Major was too badly damaged mentally to be of any help.[1]

While hanging around the Bowery Alleyways with Spawn, Major Forsberg was frequently frightened by the worms, bats, and other creatures of darkness Spawn was using to replenish his powers. When Spawn began operating on Cy-Gor and Forsberg had valuable information on Cy-Gor's past and the implications of Wynn ordering Cy-Gor's cybernetic experiments.[2]

Forsberg soon returned to his incoherent ramblings until he ran off without warning.[3]

After leaving Forsberg locked in a prison, Spawn is coached by Nyx to return and right his wrongs. He enters Forsberg's mind by touching him and helps him release his guilt. Forsburg eventually requests that he be freed and Spawn obliges and kills Forsburg.[4]

Retrieved from "https://imagecomics.fandom.com/wiki/Major_Forsberg?oldid=57332"
Community content is available under CC-BY-SA unless otherwise noted.