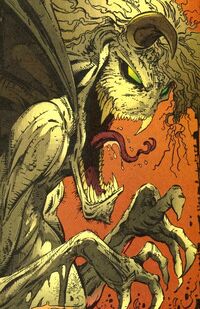 The Demon Malebolgia was one of the most powerful rulers of Hell, and reigned unchallenged in the 8th circle of Hell for 70,000 years. He struck a deal with Albert Simmons to make him the newest Hellspawn.[1] He was only one of Hell's many rulers forming an army in its forthcoming Armageddon war against Heaven and God.

Malebolgia was responsible for the creation of the newest Hellspawn, Al Simmons. Malebolgia was respected and feared as the most powerful of the rulers, and thus the de-facto grand master of Hell. His powers include energy projection, matter manipulation, enormous physical strength, recuperative abilities, and abilities to morph and induce hallucinations. His standing in Hell's hierarchy gives him nigh-unlimited power while in the 8th Sphere. His mastery of Necroplasm gives him the exclusive ability to create Hellspawn and during his rule, he created an army larger than anything Heaven could handle. He was the orginal Main antagonist of the Spawn series and later reprises the role in some of the later issues.

Malebolgia saw promise in a military and tactical assassin, Al Simmons. He sent Al back to Earth as the new Spawn so that he could see his wife, Wanda Blake, once more. However he twisted the deal, along with of his words, to constantly make Al's life a living hell. Malebolgia's plan was to make Al the newest Hellspawn, an officer in training to serve in the army of Hell when it waged war against Heaven in the mighty Armageddon battle.[2]

Malebolgia's main officer was Violator, who was sent to train Al to use his hate and anger to strengthen Hell's army with more soldiers. At first, all Hellspawn are confused and quickly and irresponsibly use their powers to further kill their foe. However, Spawn found an ally in Cogliostro, a previous Hellspawn, who trained him to go against Malebolgia's wishes.[3]

Malebolgia continue to watch the young Hellspawn via his blood-pool tracking pool and laughed with ever new slip of his power and murder Spawn committed.[4]

Malebolgia is slain by Spawn in issue #100. Spawn is offered the crown of the Eighth Circle, and though he declines, Spawn still receives vastly enhanced powers and a command over Hell itself. It has become known that Mammon is a far more commanding presence in Hell than Malebolgia and later on Satan himself being the True Ruler of Hell. Though Malebolgia is given self-determination and rule over a level of Hell, he is far from the most powerful being in The Pit.

As Spawn issue #199 ends, the now-returned "Freak" from early Spawn canon is attacked by Clown, who rips the Freak's arms off. The Freak laughs it off and lets Clown know that he is not scared of him or any other of the Spawns because they are all "his." Clown quickly shies away as the Freak begins to transform. After reattaching his arm, the Freak transports Violator to Hell. Upon returning to Hell, Violator regains his full strength, as well as his senses. Fear consumes Violator as he looks deep into the Freak's eye, which become all too familiar to him. Violator trembles in fear and astonishment. The Freak reveals his true identity to be Malebolgia. After being defeated by Al Simmons, the Lords of Hell cut off Malebolgia's power and set up "road blocks" to ensure that he never returned. Betrayed, Malebolgia swears to regain his true power and form and kill all those who tried to prevent his return, including the Violator who had sided with Malebolgia's greatest rival, Mammon, after Malebolgia's fall. Malebolgia orders Violator to tell of his return in order to spread fear. He then teleports, leaving a skeptical and terrified Violator alone in the wastelands of Hell. Malebolgia is seen approaching an asylum or prison inmate, demanding the prisoner return something of his.

Retrieved from "https://imagecomics.fandom.com/wiki/Malebolgia?oldid=67164"
Community content is available under CC-BY-SA unless otherwise noted.