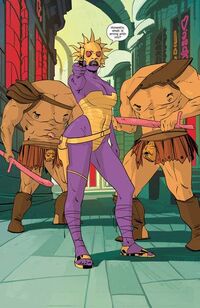 Mama Sun runs the sex business on Sextillion. She uses a Security Elixir that is injected into each of her slaves. The Elixir will harden their arteries if they are taken from the planet prematurely.[1]

One of Mama Sun's prostitutes was a 6 year old girl. When The Will arrives on the planet and discovers the child forced into sex slavery, he attempts to free her. Mama Sun stops him at his ship and informs him that her contract has not ended and will cost six hundred and fifty credits to release her. The Will tells her he doesn't have the money and will steal her. Mama Sun informs him she was injected with a Security Elixir that will kill her if he tries. Mama Sun walks away with his unlimited credit card and tells him she'll call it even for damages when she takes the card.[2]

Sophie was later saved from the sex labor by a The Will. He attempted to steal her by pretending she was from the planet Wreath and would incite a war if the people of Wreath knew an underage girl was forced into sex labor. However, Mama Sun forsaw the trickery and sent her Sextillion Loss Prevention to stop him. The Will over-powered them.[3]

Later, Mama Sun welcomed royalty to her planet. Prince Robot IV arrived to visit the sex slaves but was clearly not well. His head had been cracked and damaged. He continually had prostitutes sent to him due to the damage he endured while on Quietus.[4]

After days of sexual exploration, Mama Sun woke him up to inform him his child had been born. The Prince expectantly shot a hole through her chest, killing her and left to retrieve his son.[5]