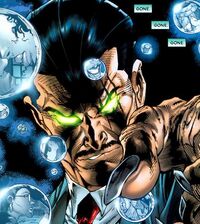 Mammon is a powerful deity emerging from Hell. He is one of many rulers from Hell and was happy to see Malebolgia removed form his throne.

It has been stated that there is only one way to destroy Mammon and that Spawn does not possess that power. What exactly it is has not yet been revealed but it has been hinted that his pride will be his undoing.In issue 184, it is also revealed that Mammon had influenced Al Simmon's K7-Leetha symbiote costume, prior to its bonding with Al Simmons, promising it great power in exchange for its services and convincing Malebogia that it was worthy to become Hellspawn. It is then also revealed that Mammon plans to transfer the symbiote to Morana, believing that Al Simmons was "finished" after Armageddon and that Morana was the one who will sit by his side and rule the world.He eventually was defeated by Nyx and sealed away alongside Morana.

Retrieved from "https://imagecomics.fandom.com/wiki/Mammon?oldid=66912"
Community content is available under CC-BY-SA unless otherwise noted.