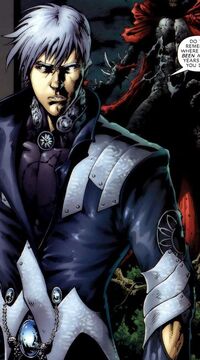 The Man of Miracles (aka MoM, a fan abbreviation) is a mysterious super-being who has appeared in the alleys to offer his guidance and wisdom to The Hellspawn so that he might play his part in Armageddon. He is a being of practically unconceivable power who has been the architect behind most of the events in the Spawn universe, holding significant knowledge about Al Simmons and his role as Spawn, knowledge that not even Mammon possesses and possessing powers beyond than of God or Satan. His true form is as the "Mother" of Existence, though he is neither male nor female.