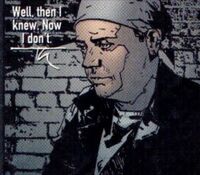 Manara is a bounty hunter who was constantly at the wrong end of the stick with Bilal Christian.

A while back, Jinx Alameda teamed up with Manara. When she was accosted by the perp they were hunting, she flipped him over and slapped handcuffs on him. Bilal Christian, a rival and dirty Bounty Hunter, showed up and stole the bounty from them.[1]

Later, Manara and Pratt had cornered Bob Matson, a rogue bounty. When they were going to turn him in to Carl Munoz, Bilal appeared once more and stole the bounty again. For revenge, Manara called Munoz to set Bilal up to be shot upon entering his facility.[1]

Later, Manara and Pratt continued to follow Bilal. Twitch spotted the in the distance and arrests them for putting them in danger by tipping of Munoz.[2]

At the police station, they interrogate Pratt and Manara. While they didn't know Bilal's location, they received a sudden call from him. While on the phone, bounty hunters broke into the room where Bilal was located and Twitch heard gunfire. Sam and Twitch sent out an APB on the gunshots and received a tip on his location.[3]

Retrieved from "https://imagecomics.fandom.com/wiki/Manara?oldid=37290"
Community content is available under CC-BY-SA unless otherwise noted.