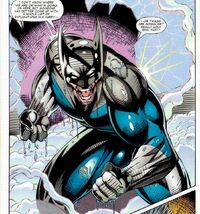 Son of the wealthy Bernand Barros Marc left for a research trip with his father and brother Marc but their submarine was shot down by the evil Warlok, luckily for them were rescued by Roman who through the magic of his people was able to give him the ability to breathe underwater and unlock their powers.

Marc thus obtained enhanced strength and durability and the ability to fly, Marc was then recruited into the second iteration of Brigade by Battlestone, and together with the team he fought against the evil alien Genocide.

During the years Marc battled powerful opponents but lost his will to fight after the apparent death of his brother at the hands of Crypt.

Marc, having abandoned his career as a superhero, tried to keep the team together by supporting it financially but after the death of ShadowHawk and the attempt by a group of cults to take control of the underwater city of Neuport Marc found his fighting spirit and together with the rest of the team manage to avert the crisis.

Unfortunately shortly after Battlestone and some members of Youngblood launched an offensive against Brigade and killed most of the team, Marc and Roman arrive too late to help their companions and Marc is overwhelmed by a surprise attack by Cougar but is saved at the last moment by Roman who brings him to safety.

Years later Marc as he patrols the seas runs into an alien invasion attempt and clashes with a large alien sea monster.

Retrieved from "https://imagecomics.fandom.com/wiki/Marc_Barros?oldid=66485"
Community content is available under CC-BY-SA unless otherwise noted.