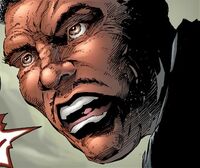 Marc Simmons is one of the FBI's top investigators. He has a degree in psychology and uses it to profile serial killers. He grew distant from Wanda Blake after his brother's death.[1]

He was summoned to New York City to investigate the Crocodile Killer as a profiler. However, he found himself arresting the wrong man for the crime. Soon, Damon Foster, the ultimate investigator for the FBI, pointed him to Travis Quinn, the true Crocodile killer. Marc was promised the name of his wife and kids' killer if he cooperated in assisting Damon Foster track Quinn down.

During the bust, Simmons moved in early, drawing attention to Foster. Foster paid the ultimate price and was murdered during the bust.[2]

Retrieved from "https://imagecomics.fandom.com/wiki/Marc_Simmons?oldid=66908"
Community content is available under CC-BY-SA unless otherwise noted.