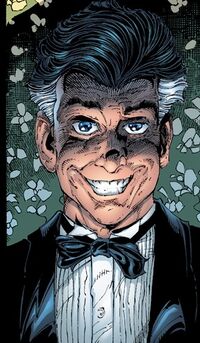 Marcus Hargreaves ran an organization called The Group. It consisted of 13 fanatics in Sussex, England, who first attempted to release Urizen by sacrificing each other one at a time under a full moon. They would eat the sacrificed person and gain the power of their soul. This would then grant each member more power with each soul they consumed until one remained. Their belief was that this would release Urizen from his prison.

Marcus hunted down Reginal Blakney as one of the victims choosen to be the hunted. He stabbed Reggie in the back but let him escape to bleed out.

Spawn tainted Reggie's body before before it was found. Marcus along with the rest of The Group soon died of the poison, leaving the prophecy of releasing Urizen incomplete.[1]

Retrieved from "https://imagecomics.fandom.com/wiki/Marcus_Hargreaves?oldid=36755"
Community content is available under CC-BY-SA unless otherwise noted.