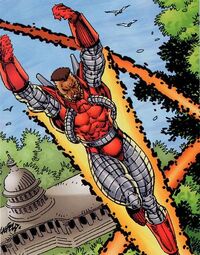 Marcus Langston grew in a poor family. One day, his father stole Storybook Smith's book and, believing it worthless, gave it to Marcus. Marcus read the magic book and found the story of his own life, that would end with him killed when trying to rob a liquor store. Marcus rewrote the story into a more favourable life.

As an adult, Marcus was contracted by the government to create a powered armor. to not risk the life of any test pilot, and to impress his co-worker Elizabeth, Marcus donned the armor himself when it was demonstrated to the military. Langston was allowed to keep the suit if he developed more. He and Elizabeth married shortly after.

When the government created Youngblood, Marcus became the first member, codenamed Sentinel. Sentinel was the leader of the away team, in charge to face threats from outside the USA.

During a Youngblood barbecue at the Langston house, Riptide found the magic book and, being Storybook Smith's daughter, recognized it. She took it and when Sentinel found about this, he went to Riptide's room in the Youngblood HQ while she was away to take it back. Riptide came back earlier and a fight ensued, which ended when Sentinel killed Riptide in cold blood. Sentinel arranged for Knightsabre to be framed for the murder, but during the trial, the book was found and the truth revealed. Sentinel tried to write in the book an outcome to cause an explosion from which he would be the only survivor, but the book was taken from his hands and he was caught.

Sentinel would resurface as leader of the villain team Badblood.