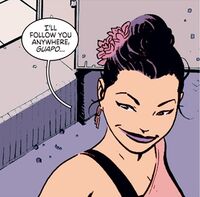 Maria grew up in Juarez, Mexico. Her entire family was murdered when her father stole food from El Alma del Diablo to feed his family. When El Alma del Diablo was about to kill Maria as well, Chico pleaded to save her life and instead bring her into their organized crime family.[1]

Maria eventually began dating Chico when they joined the King's Dominion Atelier of the Deadly Arts. She sported assassin techniques that she learned from El Diablo's group such as spitting dust and blinding a room and dressing in El Dia del Muerte outfits. Arriving soon at the school Maria fell for Marcus. She used a weekend getaway to hook up with Marcus in Las Vegas. When Chico followed her, found out, and attacked Marcus, Maria slit Chico's throat.[2]

For weeks she loathed and regretted her actions. She began drinking heavily which distanced her from Marcus who continued seeing her without the general public of the school knowing. She even attempted to kill Marcus with an arrow that Saya stopped. She didn't know how to handle Marcus getting close with another woman. Later that night as she drank herself to the floor again, Marcus cheated on Maria with Saya.[3]

During an assault on the Tenderloin, Maria refused to help Saya as she had already found out Marcus had cheated on her. Freeing herself, Saya saved Maria despite their issues. Maria thought to herself how she always needs to hate someone, and that she would have killed Chico even if Marcus hadn't. She tells Marcus she loved him but he wouldn't have to worry about that anymore. As she walked outside with Marcus who held Chico's head in his hands, they ran into Chico's father.[4]

After being chased through San Francisco, Maria eventually stood up to El Alma. Using her smoke, she caused a car to crash and disorient the group. During the wreckage, she lit Pale Face on fire and decapitated El Alma's right hand man. After chasing El Alma through an alley, she eventually cornered him and killed him, finally gaining revenge for her family.

After returning to the school, she attempted to cover for her friends and explain Lex's death during the raid on the Tenderloin. However, Master Lin was aware of her true actions and poisoned her at the request of Amante Jael.[5]