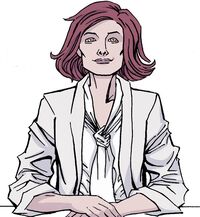 Maria Kilbride held the Townsend Brown Professorship at Lowlands University. She founded the Cross Culture-Contamination Unit and welcomed members to the group. She informed them it was being funded by Lowlands University, FPI, and the Ministry of Time. Their goal was to combine all their unique skills to investigate the future and study of time.[1]

In an early Cross Culture-Contamination Unit meeting, they discussed how every projection they found of the future implied the future would reach a plateau and level off and become boring. Simeon said it should be enough as that is what they were hired to do, so they should report it and move on with their lives. They discussed how time always seems to speed up. The study of history shows them that the world used to move more slowly and only recently had there been an explosion of events. Maria informed them she was researching Artificial Intelligence. She wanted to create artificial life and they all joked they couldn't as there was no way to break the laws of physics. Robin Morel suddenly spoke up and suggests there was a way. He said they could put a consciousness in the machine to break the laws of physics.[2]

As they delved deeper into research, Robin made the Electric Athame for Maria. He informed her it was a way to carve out a safe spot in the Other World. He explained that the universe had four main powers, and electricity was one of them.[3]

Years later, Maria was asked by Control to find a missing persons due to her groups opening of The Injection. Afterwards, she phoned Brigid Roth and told her she wasn't trusting the FPI with the data. She told them that the events were happening faster than she had expected and could be due to the Injection. Brigid agreed to help her after heading to Dublin.[1]

Later, Maria arrived at a facility where they informed her they had discovered a rock when the archaeologist had gone missing. They had activated something with sound and now anyone who enters the lab has gone missing. Maria entered the room and it is dark with glowing vegetation. The inside weather storms and lighting strikes the plains. She realized she had entered the Other World.[1]

Maria Kilbride exited the room and told them to seal off the door forever. She demands to see the stone they tested with sound and how they tested it. She told them she wanted personal information on the people who went missing in the room and then to seal off the entire facility. She used Vivek Headland He told her it sounded like ancient folklore of Spriggans. He wondered if any of the rocks would resonate with the sound and that's what triggered the event. He wonders if the Injection also made the connection and was using the folklore facade to lure people in. Robin told her to find the guy and have him turn his coat inside out, a rule from the local folklore, and it would break the Injections control on the man. He told her Injection can't create new rules, only use old lore. He then wanred her she better get the Sword he made for her.[3]

At Sawlung Hospital, Dispatch meets with Maria and asked for an update to report back to Control. Maria told her the missing people were most likely under the control of something. She told them they would most likely be hiding in a dark corner or some place associated with death. She told Dispatch that the men experimented with a rock that then used the sonics to alter their brain patterns as music is known to influence. She said her that this could be the origin of Spriggans, people hallucinating due to the sonic-reactive rocks. She then warned her that if that is not the case, the FPI should destroy the building.[3]

Later, Dispatch returned and delivered blueprints of possible locations the people could be hiding to Maria. Maria looked at it and recommended a particular factory. She wanted to tell her that the Injection probably choose this location due to it's sense of history but kept her mouth shut. Instead, she simply replied to have her taken there. She warned Dispatch that this could be an incursion of deep time or extraterrestrial invasion at best case. She ordered the place to be destroyed if she didn't return.[2]

Upon entering, she found the archaeologists' two assistants. Upon activating the Electric Athame sword, they agreed to take off their coats per Robin's recommendation. Miraculously, they were both instantly free of the Injection's control just as Robin had predicted. They told her to forge forward to find the archaeologist. She moved forward and found him naked. Not knowing what to do, she used her sword to pierce him. She suddenly could hear the Injection speaking to her. It warned her things would only get worst and that it had been created to make life difficult for them.[4]

Maria was later contacted by Vivek. He asked her to have Cursus offer a job to Robin. Vivek wanted Robin to accept a job with Breaker's Yard and thought a competing offer from Cursus would pressure Breaker's Yard into a sweeter deal. Robin agreed but was somewhat off-put by him not asking her about how she was recovering from the battle with the Injection.[5]

Retrieved from "https://imagecomics.fandom.com/wiki/Maria_Kilbride_(Injection)?oldid=55620"
Community content is available under CC-BY-SA unless otherwise noted.