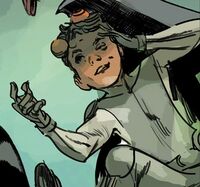 Marik Caine while the oldest of 3, is the less adventurous sibling. He learned to work on ships but preferred not to hunt. When he stayed behind one day and the rest of his family took his younger sisters out to learn how to hunt with a Helm Suit, little did he know they would not all return.[1]

Journey to the Surface

10 years later, Marik had became a police officer who skulked with prostitutes and drug abuse. One day, he was approached by a pimp for not paying and ended up in a firefight. He killed the prostitute in the exchange and was placed under arrest.[2] While in prison, Marik was about to kill himself when his mother struck a deal to free him. He was dragged along on a journey to the surface to search for a probe. They were about to run out of oxygen when his mom found a miraculous way of reaching the next city on other sea creature's backs. Marik began to see the ways of his mother's eternal optimism.[3]

The two finally arrived in Poluma. They soon spotted Roln, the pirate who attacked their ship 10 years ago. His mother was taken captive when she moved to early on Roln. Marik tried a different route. He sneaked to Tajo's quarters and attempted to convincing her to escape with them. However, she had grown devotion to Roln over the years and double-crossed him, placing him in arrest.[4]

Four months later of fighting in the coliseum tank, Marik had won 89 straight battles. He was soon pit against impossible odds while his mother was forced to watch. His crew fought with a Mammoth Isopod. When Marik was stabbed in back by one of his crew members who was being telepathically controlled by Grolm, he found himself about to be eaten by the Isopod.[5] However, he found a Truth Shell that had been tossed in the tank and blinded the created. He was pulled up by fellow mutineers and made announcement to the people of Poluma. He asked them to rise up against their oppressor. Seeing the people question his commands, Roln challenged Marik to battle. When he was attacked by Roln and saw his sister also in danger, he did the right thing by his father's training and saved his sister's life. As a result, Marik was stabbed in the back by Roln and died. His death fueled Tajo to retaliate and destroy Roln and the rest of the city.[6]