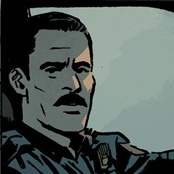 Mark Holt is a police officer who doesn't care for Kyle Barnes.

When Mark returned home one day, he found Kyle Barnes in his house. He became irate that his wife, Megan Holt, had let him in. He continued to hold a grudge against Kyle for accusations that he beat his wife years ago.[1]

Later, Mark was called to the Hume Farm where Joshua Austin had just been exorcised by Kyle Barnes. Mark watched Kyle and told him he was watching him.[2]

Later, Mark was on patrol in his police vehicle. He stumbled upon Kyle, roughing up a man in the street. When he came to stop the fight, Kyle informed Mark the man was Donnie, the man who raped his daughter. Mark quickly turned and beat the crap out of Donnie as well. Kyl and Mark headed to local bar to drink and discuss their problem. Mark began to see Kyle as OK after their talk.[3]

Days later, Holly woke up late at night. She walked downstairs to find her dad, Mark, and whined that there were dog noises upstairs. Mark put his daughter back to bed since they had no dog. However, once upstairs he discovered his wife had been possessed as she growled at him.[4] She leaped towards him and Mark fell backwards and knocked his head against the wall. She slammed his face against the ground and headbutted his nose with her head. Holly entered the room upon hearing the noise and clutched her stuffed animal tight as she witnesses her mother's behavior. Megan turned towards Holly and lurched towards her. Mark eventually stopped her and subdued her in the upstairs room. He rushed to Kyle's House where he begged Kyle to help him with his wife. Kyle agreed and let Mark stay at his place for the night.[5]

However, Mark grew impatient. He left to see how they were doing and walked past Sidney on his way out. Upon arriving at his home, he found Megan bruised, bloody, and covered in water. He became furious and told Kyle and Reverend to leave his wife alone. They begged him not to trust her but it was too late. She was still possessed by a demon and pushed Mark out the window. Mark fell down two stories and bent his back over a bird bath in the lawn.[6] Mark was shortly taken to a local hospital to be treated.[7]

Retrieved from "https://imagecomics.fandom.com/wiki/Mark_Holt_(Outcast)?oldid=56988"
Community content is available under CC-BY-SA unless otherwise noted.